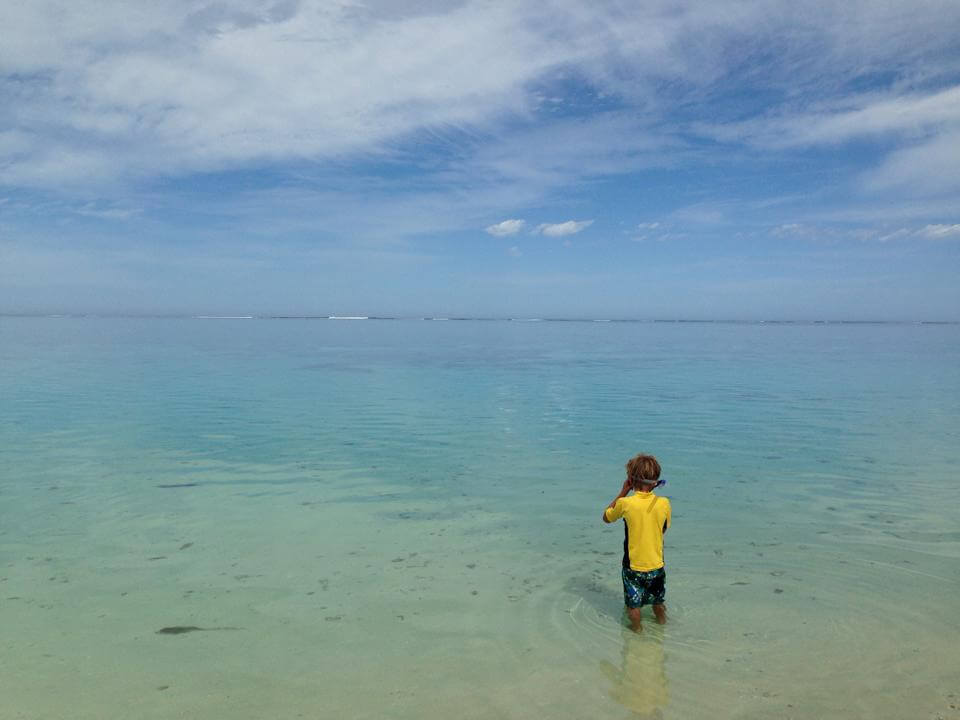 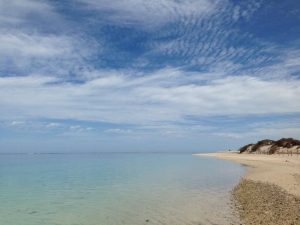 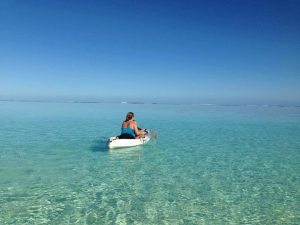 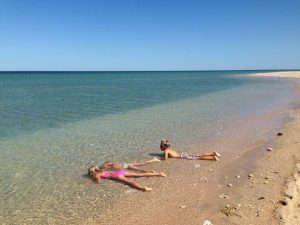 Snorkelling Ningaloo Reef Adventure was written by a family who stayed with us and wanted to share their experiences at  Turquoise Bay during their stay. Like to share your own experience? Please contact us, we love to hear from our guests.

At the edge of a desert landscape we found an Island paradise with a giant aquarium full to the brim with marine life. A must see thing to do.

Imagine stepping from a soft white sandy beach into a clear warm water ocean paradise. Exmouth magically has the power to somehow transport people to place that doesn’t seem real. Do you remember the 1980’s holiday brochures? The kind of brochure that even as a kid the reality of the brochure was easily recognisable as being totally unbelievable? Everyone knew places like that just didn’t exist. Well that’s what I used to believe.

That was until we went snorkelling at Turquoise Bay.

Exmouth is a tiny town at the edge of a desert landscape, many KM’s from any sort of city civilisation. Getting there was actually a small monumental mission. West Australian’s are well known for packing kids into cramped 4wds and hitting the road for a couple of days just to reach this place. That’s exactly what we did… Packed the car, packed the kids, packed the towels, packed the food and I think we even packed the kitchen sink! After two solid days of travel we arrived, a little worn out from the trip and super thankful that we had the foresight to book a self contained holiday home… No tent setup! Easy-peasy.

Snorkelling the Ningaloo Reef was one of my bucket list item things to do in life. It’s just one of those places you hear people talk about. People would tell me stories of a far away place called Turquoise Bay, as they talked their eyes would slightly glaze over, reminiscing of another time and place.

So on our first full day in Exmouth we made a bee line for Cape Range National Park. We decided to beat the rush head out early, directly to Turquoise Bay… Do not pass go, do not collect $200.

It was heating up by the time we reached the beach. The kids couldn’t wait for a swim. We heard about a ‘snorkelling drift’ and decided to head to that spot first. Armed with three pool noodles, an old dinged up surf board, a kayak, a few sets of snorkels & goggles, snorkelling fins, beach towels, an umbrella and a classic blue esky, we managed to hobble our way to the beach. Luckily it was a short walk!

WOW! And WOW! Wow factor plus ++! The place took our breath away. There wasn’t a breath of wind, the ocean looked like light blue glass melding into a similarly coloured blue sky. The beach only had two other people. We felt like we had just walked into our very own tropical island. Needless to say everyone didn’t waste time dumping the gear and hitting the water.

Huge fish with a black spot were swimming right at the very shores edge around our feet as we got our gear on! After the kids finished fiddling with their snorkel gear for a bit, everyone was keen to swim out deeper. We gave the kids the pool noodles to help them as they were a little uneasy about the snorkels. During the morning ‘the drift’ was only a very slight current, safer for younger kids.

Hot Tip: Pool noodles are fantastic for the kids.

Swimming into the clear water, the tide was low and the reef was shallow. About five meters from the shore the reef started showing. Large coral outcrops with so much life! Fish were swimming all around us. Small ‘Nemo’ fish, Bluebone, Emperor, Snapper, Parrot fish and even small black tipped reef sharks! The most coolest thing by far had to be the cute turtles. The turtles swan up close and lazily, checking us all out as they went past.

There was such an amazing amount of life to spot as we were snorkelling the reef. As the kids got tired we took it in turns to rest on the beach while one of us swam out into the bay, discovering new things to see. Everyone seemed to swap around, taking turns on the beach, tired from hours of snorkelling but wanting so desperately to stay out in the water.

It’s one of those places you just have to see to believe. The marine life under the water is such a contrast to the landscape ashore. Snorkelling this spot is like swimming in a giant aquarium.

As the morning progressed the tide came in and so did the people. The wind was up by the afternoon and the ‘Drift’ became a little strong for the kids to swim against.

Hot tip: The morning is by far the most special time to be snorkelling Ningaloo Reef.

After almost a full day we decided to leave and headed back to our accommodation in Exmouth. Along the way we spent some time at the Milyering Visitor Centre, bought an ice-cream and then we drove to the lookout at Vlamingh Head Lighthouse.

We all went home tired and satisfied.

Worth Visiting? For Sure!!

We ended up spending as many mornings as we could during our stay snorkelling Ningaloo Reef at Turquoise Bay. We also got a lot better at packing our beach gear.

On our very last visit we left with heavy hearts, not knowing the next time we will visit such an unreal spot. Sad it was the last visit but happy we got to visit at all.

Well worth the effort as Exmouth isn’t just ‘any old place’… It’s a place that’s most likely the closest thing to the great barrier reef that Western Australia has to offer. The best part is snorkelling Ningaloo Reef is so close to the shore.

Just do it! My advice… Stop wondering and start doing, life’s way too short to miss out on snorkelling Ningaloo.

Exmouth holidays made easy with holiday houses to suit everyone! Ningaloo Reef Holiday Homes offers a rang of accommodation including;

If a holiday house on the marina is something you would be looking for we offer a full range of marina homes. Some marina holiday accommodation has boat mooring facilities and boat parking facilities. The marina holiday houses are new and located close to town beach and Novetel Resort. Within walking distance to the town centre the marina homes are a perfect choice for exquisite premium water front homes, with a lot of luxury when staying at Exmouth in Western Australia.

Exmouth Holidays are for everyone! Holiday villas are a great option for a couple or small family group, wishing to stay in something that’s more suitable to individual needs. Some of our villas are located in popular Exmouth resorts and gives you the privilege of using all of the resort facilities.

Pet Friendly holiday homes is our speciality! Bring along the whole family on Exmouth holidays! We can cater for your pets and ensure you all have a fantastic time while visiting Ningaloo!

Exmouth holidays are a great way to explore the coral coast region including Coral bay and surrounds. Explore the Cape Range National park and World Heritage areas from the comfort of an Exmouth holidays houses.

We have some local guest info that helps you plan your Exmouth Holidays! We have a list of local events and local links.

For the current weather we advise checking the BOM website to keep up to date with the local weather. Google maps will provide a comprehensive Exmouth map with the option to have a look from street view. This might be helpful when choosing the right holiday house for your Exmouth holidays.

Wondering what to bring on holiday? Our holiday homes are self contained and designed for you to walk in with clothing and food and having everything else provided. We also offer equipment for hire for more specialist needs such as baby equipment hire. We offer a FAQ page with the most common questions that quests often ask. If you have any more questions, please contact our team,we are more than happy to help!

Our booking process is easy and quick. If you prefer to talk to someone directly please give us a call directly and we can help. Our team is more than happy to answer any questions and help match you to the perfect holiday accommodation for your Exmouth holidays. Each of our holiday rentals has testimonials for you to read and decide if the holiday house is right for your Exmouth holidays.

Exmouth has some amazing natural beaches & attractions! A unique part of Australia that is on the Ningaloo Reef and on the World Heritage list! Tour operators offer guided tours around the Exmouth area that showcase some of the best parts of the region. Exmouth also has plenty of things to do around the town including restaurants for eating out and retail outlets for shopping.